Inside the writer's room 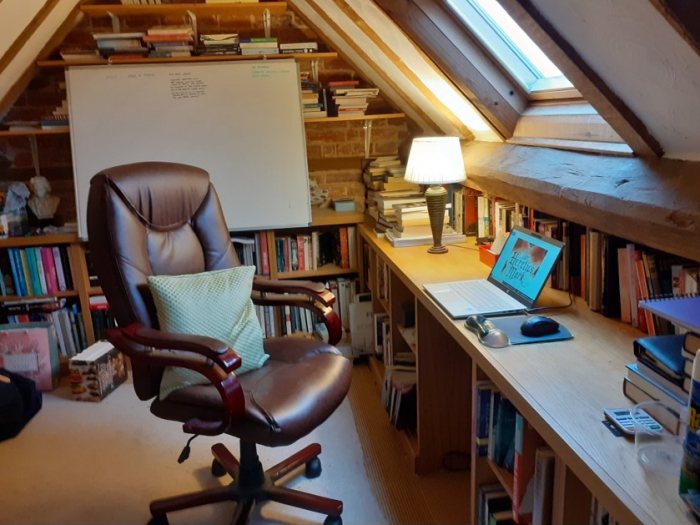 Every writer should have a garret. Firstly, it makes you feel like a proper “creative”; secondly, it gives your partner a break from your interminable mumbling as you try out lines of dialogue in your head. I call mine “The Word Mine”. It’s cosy, and gets even more so from noon onwards, because the window faces west and - if there’s no cloud cover - I have to draw the blind. Otherwise, the sun shines directly down into my face and it can feel as though I’m under interrogation by the Stasi. So I try to write in the morning.

At the moment I’m working on two projects here. One is the latest instalment in the Jackdaw Mysteries, The Heretic’s Mark, to be published next April. The final copy edit has just been completed. This is the stage by which (hopefully) my copy editor, the redoubtable Mandy Greenfield, will have expunged any surviving errors. Now the manuscript will go to the typesetter for turning into real pages. Then I, along with Susannah, my editor at Corvus Books, and my agent, Jane Judd, will have one last chance to spot anything amiss before the pages become a real book.

The other project is a possible fifth in the series, with a working title of The Rebel’s Mark. In the world of Dr Nicholas Shelby and Bianca Merton, the sixteenth century is drawing to its close. Queen Elizabeth has only a few more years to live. At the end of The Heretic’s Mark, Nicholas and Bianca are far from home. But they can’t stay away forever. Robert Cecil, the queen’s spymaster, will doubtless have need of them. In Ireland, war is raging. And Spain – Elizabeth’s sworn enemy – is not about to let an opportunity for mischief pass.

But that’s all for the future - theirs and mine. Some writers say they have a hard job stopping the stories just spilling out of their imaginations. For me, the process is a little like standing on a beach while staring up at a very high cliff. You wonder if there’s a way to the top. However, I can’t stop here until the tide comes in, so I’d better start climbing.